Tom Hooper’s ‘The Damned United’ staring Michael Sheen as Brian Clough is currently playing to favourable reviews across the nation. Based on David Peace’s 2006 book of the same name, the film recounts ‘ol Big ‘ead’s turbulent 44 days at the helm of Leeds United in 1974. Most of the stories are common currency amongst football folk – how Clough deserted his long-time ally Peter Taylor to take the job, how he despised Leeds’ physical style and what he saw as gamesmanship, his address to the squad in which he told them to throw their medals in the bin as ‘’…you got them all by cheating’, the inevitable player revolt, poor results and dismissal - only for Clough to re-emerge triumphantly at Nottingham Forest with Taylor by his side.

The subtext to both the film and book is the inevitability of a clash between a squad of successful players and a manager who had raised Derby County not only to be their arch-rivals but the antithesis of their playing style and beliefs. It’s possible that this difference was exaggerated at the time and that this film will serve only to magnify it. Though few would dispute that Leeds could look after themselves (one has only to think of Jack Charlton’s little book of those marked for future retribution) they were also a supremely skilful side that accommodated the wiles of Johnny Giles, Peter Lorimer and Eddie Gray as well as bruisers like Charlton and Norman Hunter. Even the arch enforcer himself, Billy Bremner, could play a bit. This after all, was a side that reached European finals in 1973 and 1975.

Shortly before his death in 2004, Clough gave an extended interview to the BBC. Yellow faced and bloated from a recent liver transplant, he was asked whether any of the current managerial crop caught his eye. His response,

‘I like the look of Mourinho, there's a bit of the young Clough about him. For a start, he's good-looking and, like me, he doesn't believe in the star system. He's consumed with team spirit and discipline,’

has been regarded ever since to be the anointing of his successor.

Certainly there are parallels – like Clough, Mourinho took a provincial side to European victory, defeating the likes of Manchester United en route. He also won the English championship in his first season and has always been good for a controversial (and often funny) quote.

But there are significant differences. Clough’s teams, particularly his First Division and European Cup Forest winning sides of 1978-80, were notable for their willingness to pass to feet and hit on the break – an approach exemplified by his principal forwards at that time - Woodcock, Birtles, Francis and Robertson. Though Clough could also accommodate the more rudimentary attributes of Peter Withe, he would have scorned Mourinho’s reliance on long balls to Didier Drogba and his current taste for Zlatan Imbrahimovic. He would also have been disappointed by Mourninho’s failure to play to the strengths of Andriy Shevchenko and his decision to sell ball-carrying wingers like Damien Duff and Arjen Robben. In retrospect, it’s not inconceivable that, had he lived to see them, Clough would have regarded Mourinho’s later Chesea teams similarly to the Leeds side of the early 70s.

So I find it surprising that Mourniho is often touted to succeed Alex Ferguson at Manchester United. If any manager could be said to have carried Clough’s legacy over the last 20 years then surely it’s Ferguson and not the Special One. Their teams have had far more than Roy Keane in common. Defensive parsimony built on buying the best keeper available (Shilton/Schmeichal/Van Der Saar) and a no-nonsense centre half (Lloyd/Burns/Stam/Vidic); midfielders who can pass (McGovern/O’Neill/Scholes/Carrick); tricky and pacy wingers (Robertson/Giggs/Kancheskis/Ronaldo) and mobile forwards with both skill and an eye for goal Woodcock/Francis/Clough/Yorke/Sheringham/Rooney). United at their best pass, move at pace and counter attack in the best traditions of Clough’s Forest. Hell, they even have the same red nose. 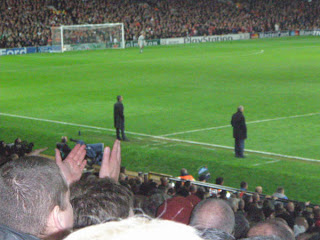 Mourinho’s arrival at Old Trafford would mean a wholesale demolition of Ferguson’s legacy.

Though I’m sure he wouldn’t proffer a bucket for Ronaldo’s medals, I doubt that he would oppose his move to Real Madrid as stubbornly. Man U fans know this, instinctively sensing that Mourinho is not one of them. Anyone who stood behind Mourinho while Inter succumbed to United last month can’t have failed to notice that Old Trafford paid scant attention to the game, preferring to indulge in 70,000 strong choruses of ‘Sit down Mourinho’, ‘Bye Bye Mourinho’ and hilariously ‘You’re not Special anymore’ throughout. Just as Elland Road never accepted Clough, Mourinho would always be ‘the other’. How long would it be before the rumours of player revolt stated? Paul Scholes or Ryan Giggs as Johnny Giles anyone? My money’s on Gary Neville.
at 8:51 PM 11 comments:

As fans of sport, we are becoming increasingly disillusioned by the growing gap between how our favourite sports are played now, and how we think they should be played. The following simple rule changes are guaranteed to redress the balance.

Athletics:
As part of a bid for greater transparency in sport, Javelin, Shot Put and Hammer events to be renamed, ‘Throwing A Big Sharp Stick’, ‘Throwing A Heavy Ball On The End Of A Chain’ and ‘Fat People Throwing A Metal Ball From Under Their Chin’.

Boxing:
Scrap the 17 weight-based divisions, replacing them with 17 sobriety-based ones, distinguished by the number of pints imbibed prior to the bout, from 1 to 17. Also known as the ‘Ricky Hatton Rule’.

Cycling:
Mandatory drug testing, to ensure a level playing field. Any cyclist discovered to be clean should be forced to take performance-enhancing substances.

Darts:
Not a rule change, but Darts has been awarded Olympic Status for London 2012, along with fellow pub-based sports, Drunken Pontificating, “Do You Want To Take This Outside?”, and Throwing Up On That Really Cute Girl You Only Just Met.

Squash:
In order to make the sport more appealing to young people, Squash to be renamed “Energy Drink!”

Cricket:
The game is crying out for new technology that can tell us with certainty whether that sharp nip-backer did, indeed, clank the batsman in the balls, rather than merely on the abdomen or inner thigh. Said technology to be named Soft Spot. Or CockEye. Or Testicometer.
at 8:49 PM 8 comments: