Sport? by Mouth of the Mersey

GU (remember them?) have chosen to cover the World Series of Poker on their Sports Blog, a editorial decision with which I concur. Other posters, predictably, have pooh-poohed poker, believing that the decision to raise, call or fold with an up and down straight draw against a likely top pair with big kicker, falls somewhat short of the Olympic ideal. That set me off on one of my favourite daydreams - what are the boundaries of this thing called "sport"?

"sport (GAME) noun
1 [C] a game, competition or activity needing physical effort and skill that is played or done according to rules, for enjoyment and/or as a job"

That won't do at all - the "tapping your head with one hand whilst rubbing your tummy with the other" is inside that tent as is "drink ten pints then name all seven dwarves".

Wikipedia, as usual, is good, if a little woolly:

"Sport is an activity that is governed by a set of rules or customs and often engaged in competitively. Used by itself, sports commonly refer to activities where the physical capabilities of the competitor are the sole or primary determiner of the outcome (winning or losing), but the term is also used to include activities such as mind sports and motor sports where mental acuity or equipment quality are major factors. Sports are used as entertainment for the player and the viewer."

I'm going to propose three criteria and look at what lands inside and outside my tent.

Sport has clearly defined winners and losers: so that's dance out and yoga too.

Sport has widely shared and understood rules: so that's business out.

I'm pleased that poker gets in the tent as does chess, but I'm a bit ambivalent about angling and I'm very uneasy about competitive eating.

As the next step in the plan for global pseudification we have been talking about a book.

Thanks to your inspirational and prolific tappings we actually have more than enough material to fill one - but there are some questions.

First question - who wants one? We need to know how many to ask for. Provisional cost, about £8 - if we self publish from Lulu.com

Secondly what goes in?

I think a selection of the non-time-specific articles (i.e. the ones that are not "this happened in this game at this point" or "I think the CL will be won by Branston Rabids") seems wise (I can produce a provisional list if needed).

If you have suggestions or remember the ones you liked the bestest drop a comment here or email me (address above).

Thirdly - what are we doing about comments. Considering there are 50,000 words worth of comments on a single article here we can't include them all. There was talk of letting the author of the article pick the ones they liked best and including only those.

Oh - and we need a front cover, so get creative people.

The drive of my life - Ebren

Taking a corner at 100mph, drifting into a slipstream and then playing chicken with the driver alongside you into the next left-hander.

Feeling your helmet start to lift off your head along the back straight and moving from third to fourth with your foot flat on the floor as you aim for a chicane. Having the balls not to lift.

How does it feel to be an F1 driver?

Many years ago I was asked why I liked motor sport - the glib answer was always that with football, cricket, rugby and tennis I knew I would never make it. Others were already far better than I would ever be.

This was something no one could take from me, I hadn't even taken my first lesson back then, but I had watched over 100 Grand Prix.

Then when the technology came out, I could sit in my room with an analogue joystick in my hand and pilot a 95-Williams round Monaco, Adalaide, and Suzuka.

But I had never driven a single-seater. Most of us haven't.

That ended recently when someone was stupid enough to put me in a Formula Audi car and let me loose on a track with little more than a tour of the circuit and a ten minute safety lecture behind me.

Then, to make matters worse, someone came off the track ahead of me with a dirty great grin on his face and told me the car was amazing - you could just brake later, corner faster, and it would let you. It would handle it. You would back down before it reached its limits.

This man was clearly not someone who had turned "indestructible" mode on his green-and-blue 95 Benetton and used the other cars on the track to brake into the Hairpin at Hokenheim.

But I took it steady for the first lap. Very steady. Then, I started trusting the car.

Braking 50m from the corner on the back straight, not 100. Braking harder, accelerating sooner, allowing the car to run then drift out of a corner at speeds that are only legal on the Autobahn, feeling your head snap to the right and loving it.

But there was a better feeling than that, far better.

Coming into a chicane I was changing into fourth, I looked down to find the right spot in the unfamiliar gearbox and by the time I realised what I was doing I was skidding over the grass towards a gravel trap.

The instructors told me afterwards they had never seen someone go that far off the track, but the car was still running.

I eased out the clutch and drove back across the grass, back to the track - I was going to nail that chicane the next time round.

And after two corners to get the gravel out of the air vents and the mud from the tyres I was racing again, flying in fact. I was not chastened by my off, I was exhilarated - Was That All the Track Had?

No, it turns out.

Running wide to take the inside line on a straight I swept past the car in ahead of me in front of the pits, getting back in line I hit the brakes later than ever and thought I might have locked up (some smoke in my left mirror) and then I saw the black flag.

Assuming it was my other-than-orthodox overtaking and driving that was being flagged I pulled up, then, shortly after stopping, the smoke caught up with me.

Fumbling with the five-point safety belt to get the hell out of the car before a) I was burned alive, and b) I was soaked in fire extinguisher fluid, I leapt from the car and got a lift back to the pits with the marshals.

What had happened - I learned later - was that while visiting the gravel trap I bent a bracket into my left-rear tyre. The damage was not enough to affect the handling (or not enough for me to notice anyway), but clouds of black tyre smoke had been pouring out the back of my car after I rejoined the track and I was probably two laps (if that) from a blowout.

Sweeping past the other car on the back straight looking like my engine was on fire was - reportedly - one of the more impressive sites for the spectators. No one filmed it.

And that was it, the best moment of the day, right there.

Walking back down the pit lane, red flame-retardant suit on, helmet in hand, helmet hair, and a sheepish grin - as your mates/colleagues applaud you in having just wiped out a racing car.

Nothing's going to come close to that for a long time. 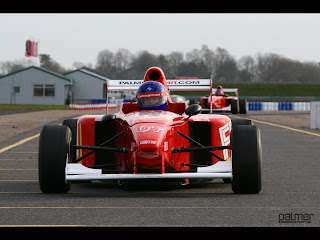