Modern football – hell, maybe football full-stop – is devout in its devotion to the result. “Ask any supporter,” we’re often told, “and they’ll take three points over a good performance any day of the week”. Your greatest sporting memory? “Reading in the paper that we’d stuffed the Mackems (or, as it might be, the Bluenoses, or the Skates, or whoever) 2-1.”

Perhaps this is because football is our most rabidly partisan sport. Results matter because Our Team matters. The team takes precedence over the sport. Which, in a sense, is fair enough. But, if this is the case, why not just replace the current four-division league system with a 28-week serial coin-toss? You get winners, losers, bragging rights, reasons to smash up train carriages etc, and for a fraction of the cost (2p, unless you wanted to insist on playing important games simultaneously in order to prevent one set of tossers – pardon me – having an unfair advantage).

I’m not trying to deride football; it just worries me that this result-obsessed culture can only have a bad influence on all our sports.

I’ve just switched off the radio after the close of play in Trinidad: the Windies scraped a draw in the final Test, and bagged the series 1-0. What a finish. I mean – what a finish.

But what I didn’t like about this series was the use of the umpiring referral system. Its failings have been pretty thoroughly picked over in the press over the last few days, but the specifics of the system don’t much interest me. What I’m interested in is the principle.

Borderline decisions – borderline wickets, borderline survivals – should be seen to be of borderline value. No bowler is going to recline in the clubhouse in the twilight of his career, thoughtfully swill his cognac in its balloon and murmur: “Remember that time Perkins was questionably given out to my speculative armball back in ’72?”. Results matter, and teams matter, but the game – the great achievements and great moments of the game – should surely be paramount. Cricket isn’t usually bad at this sort of thing. Record run-hauls on shirtfronts are given short shrift by the cognoscenti; eight-fers on sticky dogs likewise. Results are just another kind of statistic, and the statistic is brother to the damned lie.

The clincher is this: cricket, like rugby, has Tests – football has Meaningless Friendlies. Why are the Ashes so important? Because the Aussies are so damned good. Why, in contrast, is the Football World Cup important? Because we all want a big tin pot. If you win an important game in football you win a cup. Hooray. In cricket – give or take the odd token urn or sceptre – what you win, if you win, is a win; it’s about who you beat, and how you beat them, not about the bauble foisted on you by a blazered dignitary.

It used to be like that in football – think England-Scotland in ‘67, or England-Hungary in ‘53. Not any more.

This isn’t an aesthete’s call for football to be prettified, Wengerised, and turned into an easy-on-the-eye circus. Teams should play to win – I don’t mind if they have to be dour and defensive at times to do so. But players and managers should remember that football is more than just a way of deciding who ends up with the cup at the end of the season. Football as football, and not as an over-elaborate results generator, really matters.

So no more bloody football friendlies, I say. Let’s call them Tests. That’s what they ought to be, after all. Let’s remind the players that they’re professional sportsmen even when it isn’t a World Cup year. Let’s remind them that every minute of every game is a test of their skill, their strength, their bottle and – if I might offer a speculative explanation of the origin of the word ‘Test’ – their balls.
at 5:00 PM 28 comments:

All of the above are true.

Unlike their male counterparts, who are well-paid, well-publicised, expensively sponsored, and over the last few years have alternated being maddeningly inconsistent with being downright useless, the women are semi-professional or amateur, don’t get much sponsorship or media coverage, and over the last 18 months have become world-beaters.

You’re used to seeing the England men in adverts for Boss or expensive watches... here’s the top-ranked bowler in the world (female), Isa Guha, at her part-time job as a lab technician: 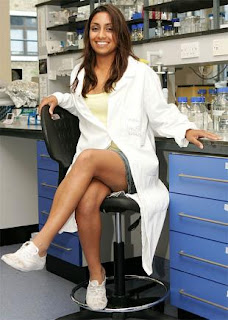 (picture by Christopher Lee from Cricinfo)

Now, all right, women’s cricket isn’t quite like men’s, they don’t play many Test matches for a start, they don’t bowl as fast or hit as hard. But the same is true in most sports. Women’s tennis gets plenty of press coverage. Perhaps the cricketers should play in short dresses and frilly knickers... 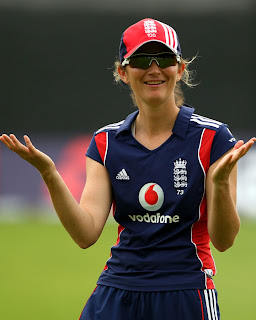 During the Olympics, we all got to know our Victoria Pendleton from our Rebecca Adlington. But apart from a very brief phase when the England captain Charlotte Edwards (ICC Women’s Player of the Year 2008) was in contention for BBC Sports Personality of the Year, we don’t hear much about the cricket players. Sports editors don’t bother to cover the competitions, even when England are winning.

But how many sports can you name in which the England team is the best in the world? Exactly.

So, UK Pseuds, keep an eye on the papers for those small paragraphs, and if – when – the girls win the World Cup Final on March 22nd, raise a cheer and maybe drink their health. Because they’re worth it.